On Saturday the 21st of November, the inaugural KWS Farmers market team met for our first weekend workshop; sausage making. We met in the the food technology kitchen and were introduced to Stefan Birmilli (a current KWS parent) from Cured (in Orange) and Rudi’s Butchery (in Sydney). He showed us how he cuts the pig into sections and then what can be made from each cut. The pigs themselves had been raised by Mr Zinga’s students in Year 9 agriculture, having kindly been donated by Windridge Farm in Young. 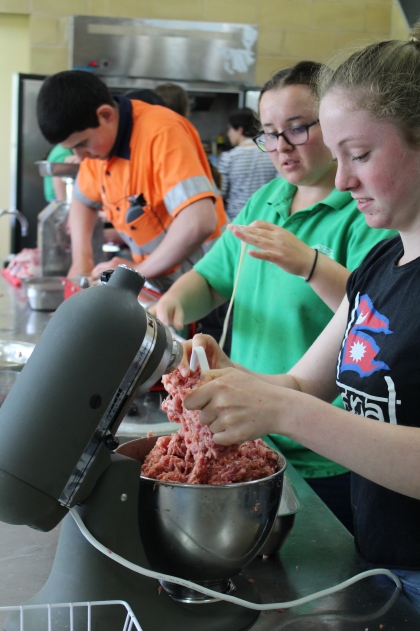 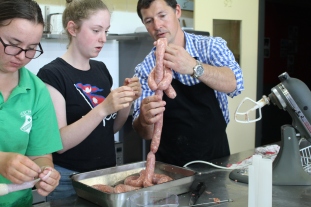 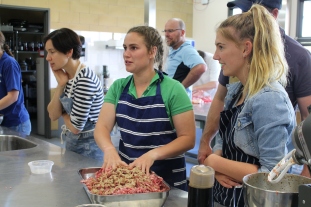 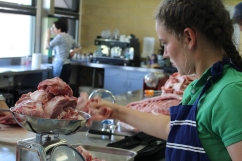 The pigs used were fed (with kitchen scraps) on campus by the staff and students at Kinross Wolaroi. He deboned the meat, fat and skin of the front leg, neck and shoulder. The students then ground the meat in the meat mincer while others created a spice mix consisting of salt, pepper, chilli, a mixture of fresh and dried herbs and other spices such as paprika and garlic. We added this to the mince to give the sausages our unique flavour. After we minced the pork and added the spice mix, we added some ice cold water to the mince and massaged the meat until it was bound and had a sausage like consistency.

We then pumped the mince into the pig intestines (natural casings) to create the sausages. This created some difficulty for some as we were not familiar with the art of the trade and couldn’t find the right speed at which to pump the meat. We then looped them and sized them into the sausage shapes you see in the supermarket. Overall it was a highly successful day and we all enjoyed it thoroughly. We made around 30kgs (340+) of sausages of all different flavours and learnt a lot from the sausage making process. We look forward to our upcoming bacon and ham curing in the coming weeks.

A special thanks goes out to Mrs Bilton, Mrs Haydon, Mr karbowiak and of course Stefan for their understanding and enthusiasm on our first day of the TREE ‘butchery’ program.

3 thoughts on “Sausages with Stefan”